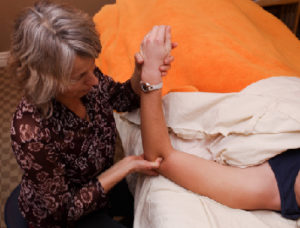 The Origins of Bowenwork
The late Thomas Bowen of Geelong, Australia developed the techniques now known collectively as ‘Bowenwork’, in the 1950s. Bowen’s approach was to reset the tension in certain muscles and muscle groups by using a unique stretch and rolling movement, and then pausing between sets of moves to give the body time to begin its response.

He achieved amazing results. According to a 1974 survey of alternative health practitioners by the Victorian Government, Bowen was doing over 13,000 treatments per year. In over 85% of his cases, the problem for which his patients sought treatment were resolved completely.

In the last years of his life, Bowen allowed several practitioners to observe him. He recognized only six of them as having understood his work. One of these, Oswald Rentsch, promised at Bowen’s deathbed to make his work known around the world. Oswald’s interpretation of Mr. Bowen’s work is now taught in over twenty countries under the auspices of the Bowen Therapy Academy of Australia (BTAA) and is known under the international trademarks ‘Bowtech’ and ‘Bowenwork’.

The Bowenwork technique
The practitioner places her fingers or thumbs on the skin, over precise points on muscles, tendons or other soft structures. She then applies gentle rolling pressure to effect a change in the underlying tissue. The changes stimulate the body’s autonomic nervous system to rebalance, and the body can initiate a healing response on structural and energetic levels.

About Bowenwork practitioners
Individuals who successfully complete the training program of the Bowen Therapy Academy of Australia and meet its other stringent requirements are certified by the BTAA as Accredited Bowenwork Practitioners. Continuing education is required in order to maintain accreditation.

Find out more about Bowenwork
sessions with Stefanie